A human trafficking crisis in Nepal is leaving a trail of trauma and lost youth in its wake. 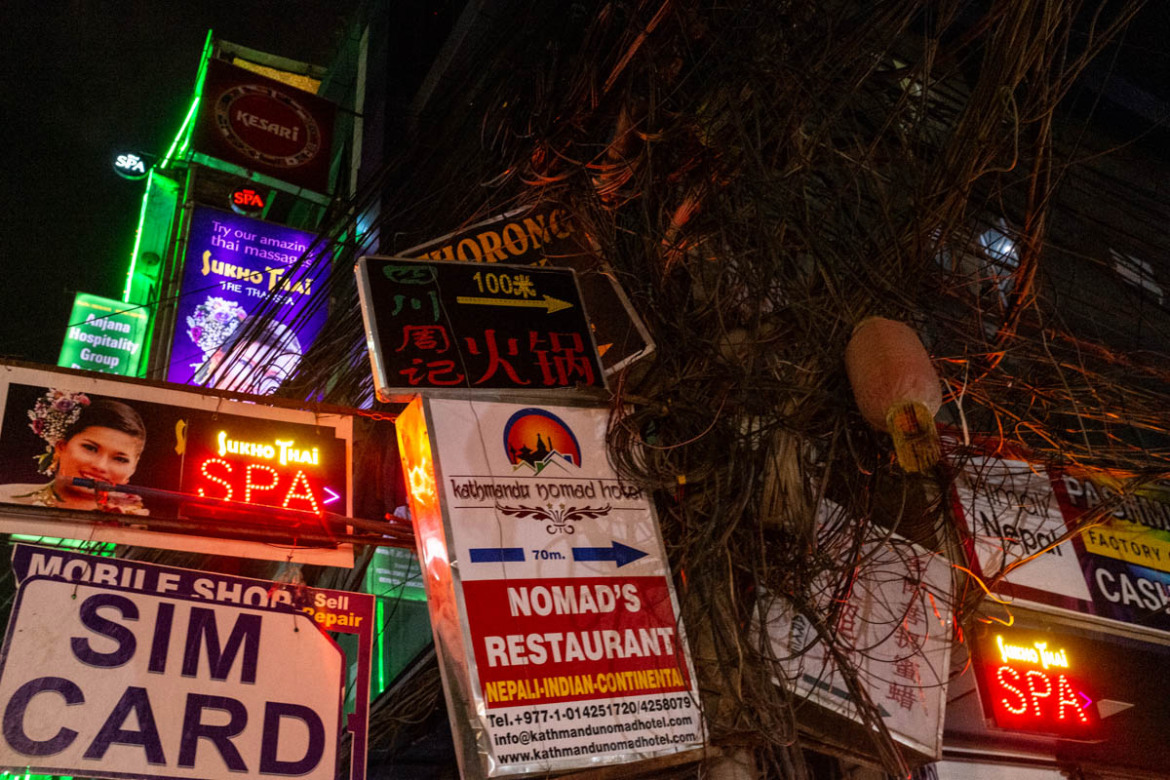 The spa industry, offering legitimate cosmetic treatments and therapeutic massages, has been fighting to distance itself from the massage parlours that function as fronts for brothels in Nepal. [Violeta Santos Moura/Al Jazeera]

Kathmandu, Nepal – The 1,758-kilometre (1,092-mile) border between Nepal and India has always been known as one of the busiest human trafficking gateways in the world.

Since a 2015 earthquake in Nepal – which killed nearly 9,000 people, severely disrupted social and economic structures, and sank scores into destitution – the numbers have risen sharply, with thousands of Nepalese being trafficked across the border and vanishing, never to return.

Nepalese victims are plunged into the world of human trafficking in different ways. Some hoped to find jobs as domestic workers in India or Gulf countries but ended up being trafficked and raped in brothels abroad. Others were simply whisked away from their families and sold to brothels in India.

Many others fall prey to another type of human trafficking: illegal organ harvesting in India.

Research suggests that “approximately 12,000 children are trafficked by strangers, neighbours and families to India every year mainly for sexual exploitation” but also for work in fisheries, construction, circuses, domestic work, sweatshops, among many other forms of forced labour and exploitation, also including organ removal.

Many trafficking victims never even cross the border; the danger is present at home as well.

Women and girls from rural areas are promised work and trafficked to urban centres within Nepal. Instead, they end up forced into prostitution in one of the hundreds of singing restaurants, dance bars or massage parlours that function as fronts for brothels in Kathmandu. It is estimated that 11,000 to 13,000 girls and women work there, most of them underage.

Nepal’s civil society is trying to fight back. Every day, border monitors, some of whom are trafficking survivors themselves, try to intercept and rescue potential victims at border posts, preventing them from being trafficked out of Nepal. Others raise their voices against the deep social stigma that pursues its victims at home.

Human trafficking is a thriving business. It accounts for $150bn a year worldwide, with women and girls making up 71 percent of all modern slavery victims. Nepal is one of the most lucrative markets. From there alone, at least 54 girls and women are trafficked into India every day.

The UN’s International Labour Organization has warned that there are more than 40 million enslaved people worldwide – more than at any time in history. Nepal accounts for only a fraction of the underground market in human beings, and the toll it takes.

*Note: Not their real name Violeta Santos Moura’s work in Nepal was supported by the Kim Wall Memorial Fund through the International Women’s Media Foundation (IWMF). 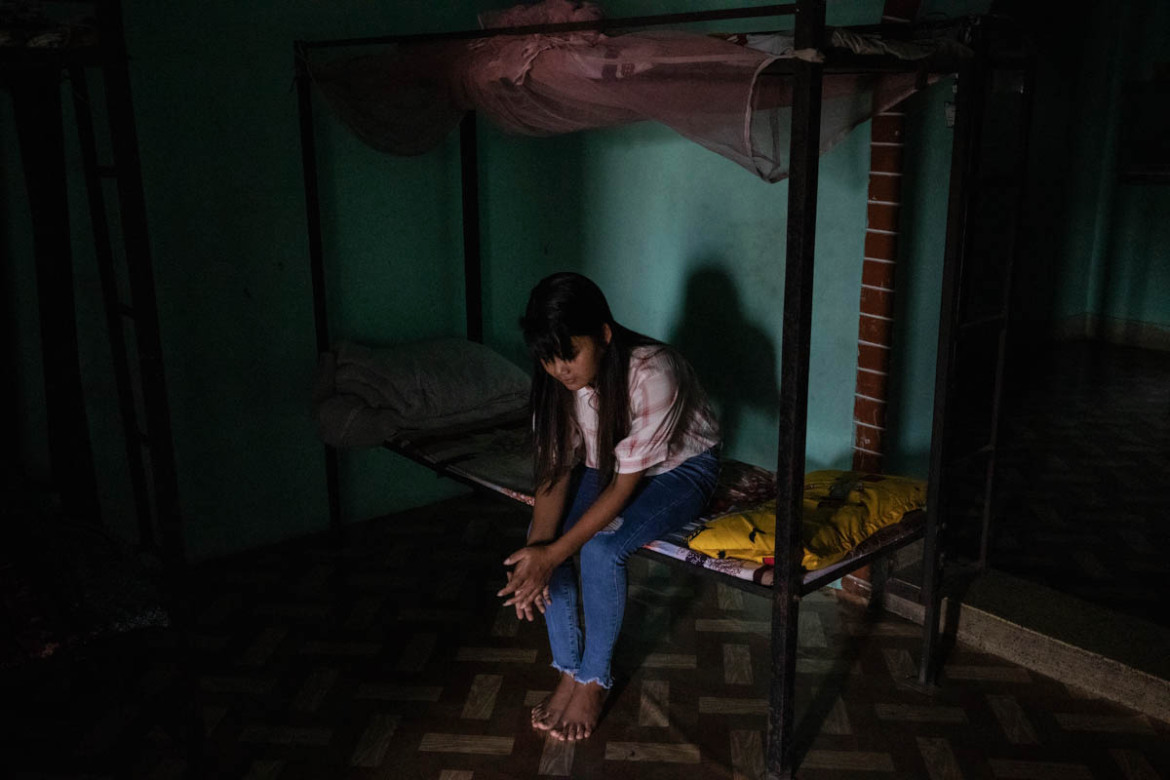 Emma*, 20, has been staying in the transit home of ​Nepalese anti-trafficking NGO 3 Angels Nepal where she receives counselling while her case is being assessed. She was rescued by the NGO’s monitors while attempting to cross the border through the Nepalese city of ​Bhairahawa ​to meet a suspected trafficker who promised her a job in India. [Violeta Santos Moura/Al Jazeera] 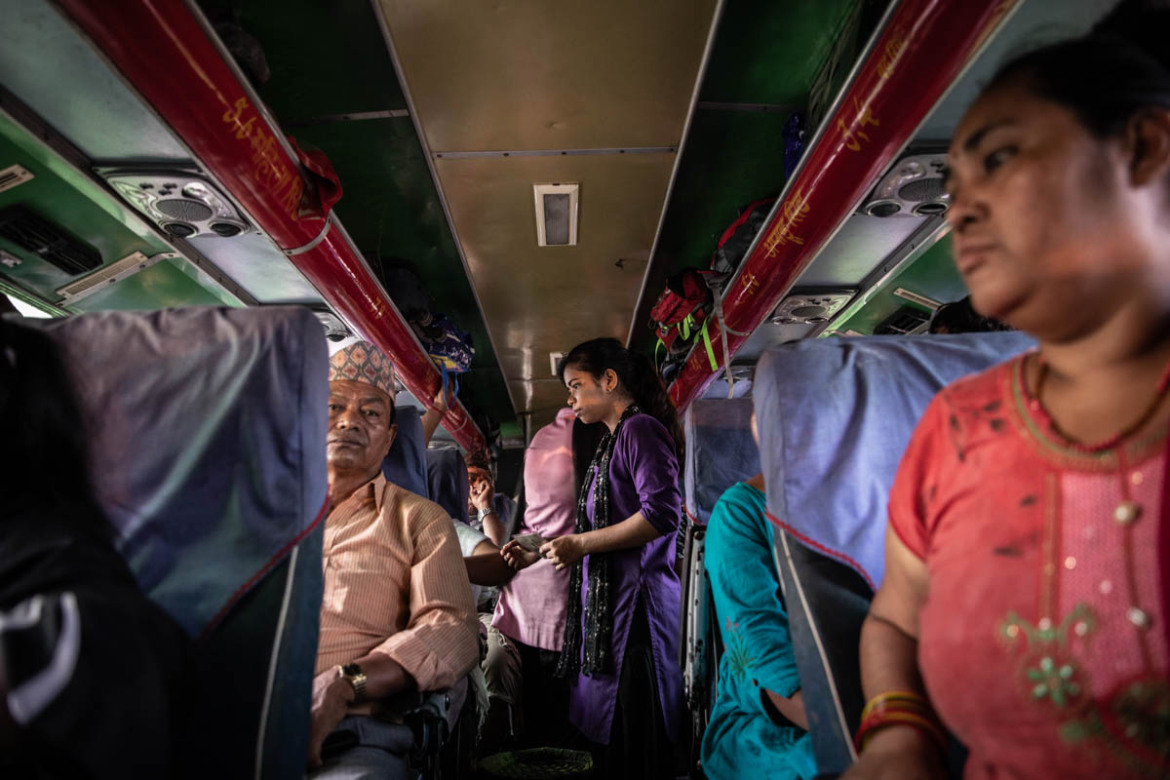 After ordering a passenger bus bound for India to stop in Bhairahawa, Maheshwori Nepali (centre) – a rescued trafficking victim turned anti-trafficking NGO worker – questions a couple (not seen) and checks their documents in an attempt to determine whether they are truly related or if it is a case of a trafficker travelling with his unsuspecting victim. [Violeta Santos Moura/Al Jazeera] 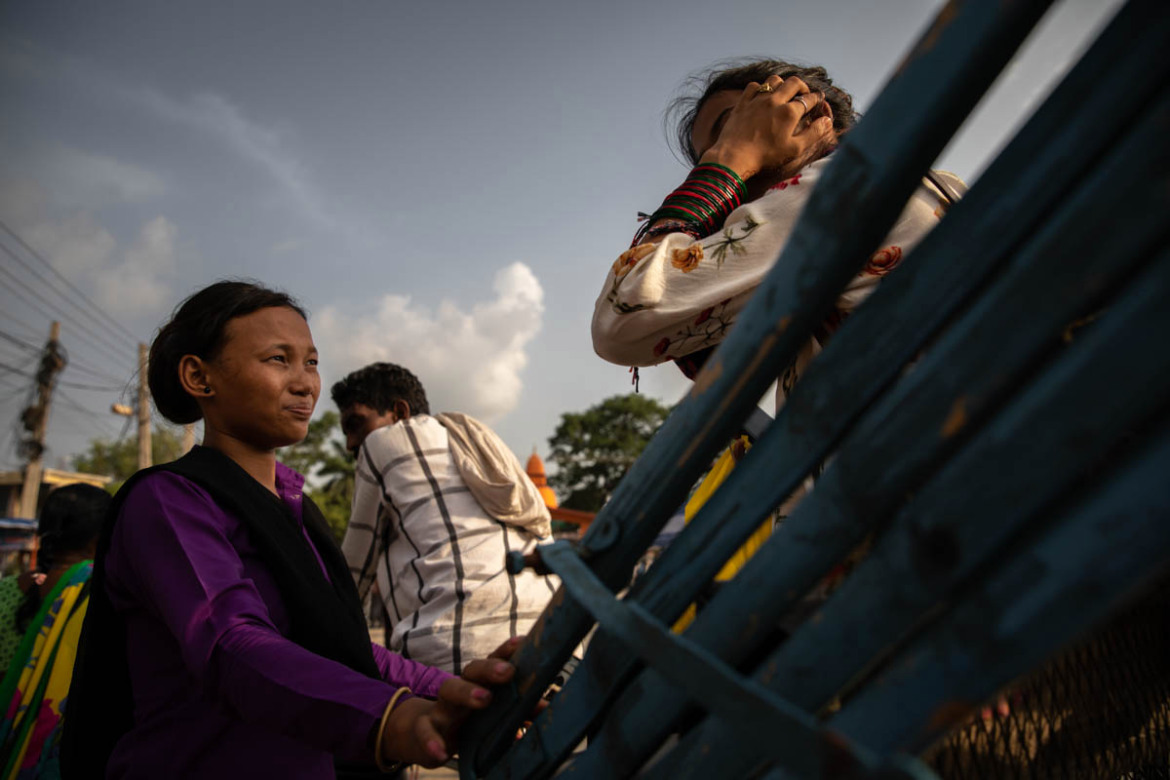 Danu Thapa, 24, an anti-trafficking NGO border monitor, stops a rickshaw carrying a girl to India through the city of Bhairahawa, to question her about the nature of her travel to determine whether she is safe or a victim of trafficking. One of the ways NGO monitors corroborate statements given by women and girls is to ask for relatives’ phone numbers and call them to cross-check information. [Violeta Santos Moura/Al Jazeera] 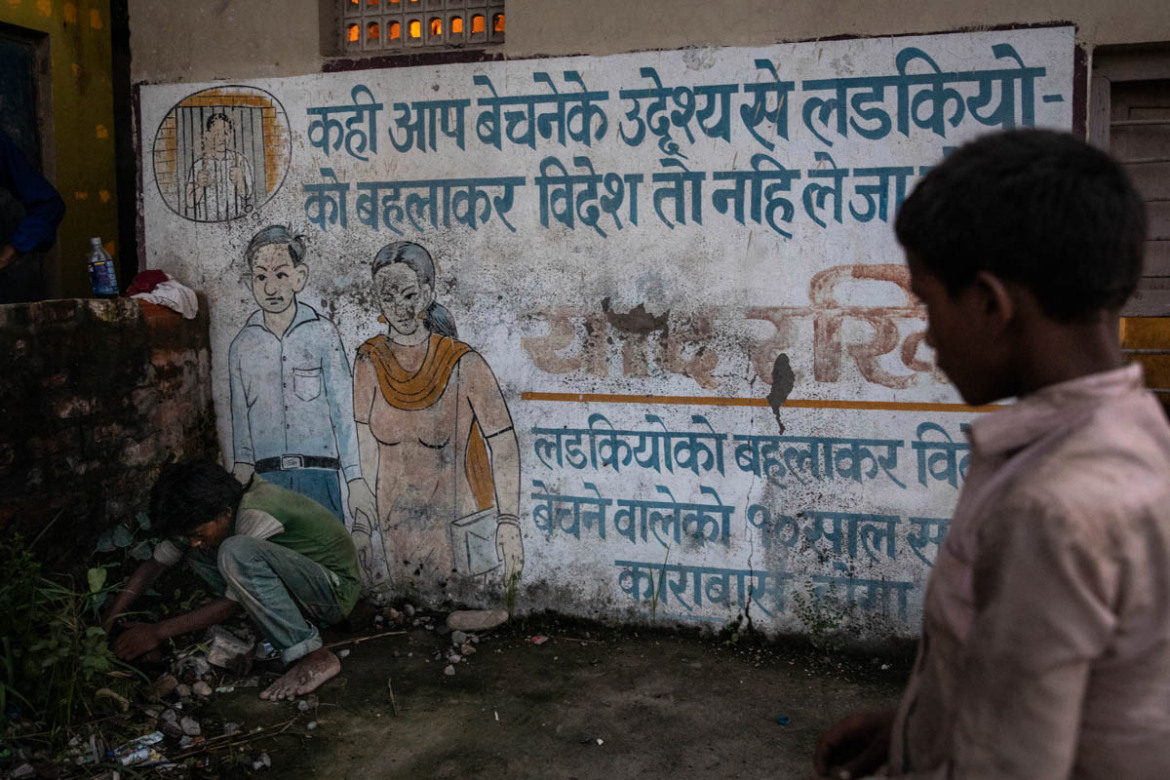 Two boys play beside a mural on the border between India and Nepal which warns women travellers of the risks of trafficking. It specifically cautions that accompanying someone who promises a job across the border could, in reality, be a ruse intended to sell them. However, high levels of illiteracy (more than 40 percent among women in Nepal) mean that not everyone will get the message. [Violeta Santos Moura/Al Jazeera] 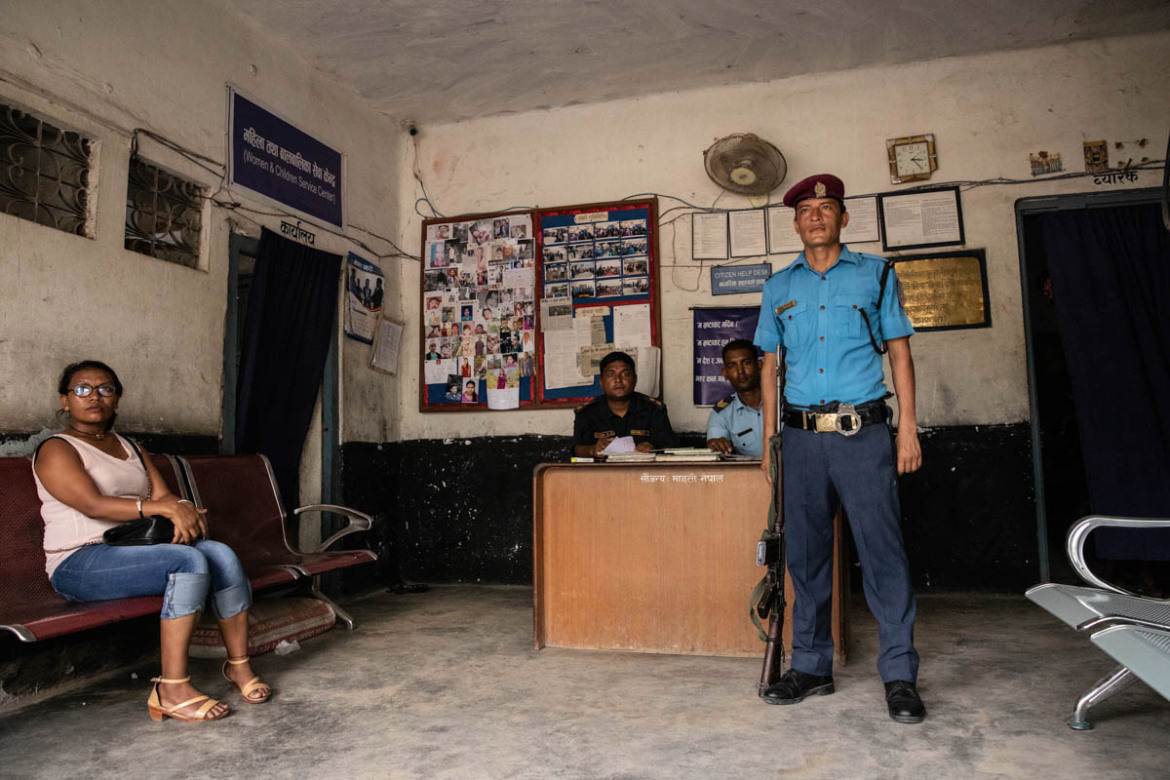 Police officers at the station in Bhairahawa. One of their tasks is to prevent human trafficking from Nepal into India by coordinating efforts with anti-trafficking NGO border monitors trying to identify and rescue possible victims. Anti-trafficking NGOs also run their own monitoring booths along the border amid a shortage of official monitoring stations. [Violeta Santos Moura/Al Jazeera] 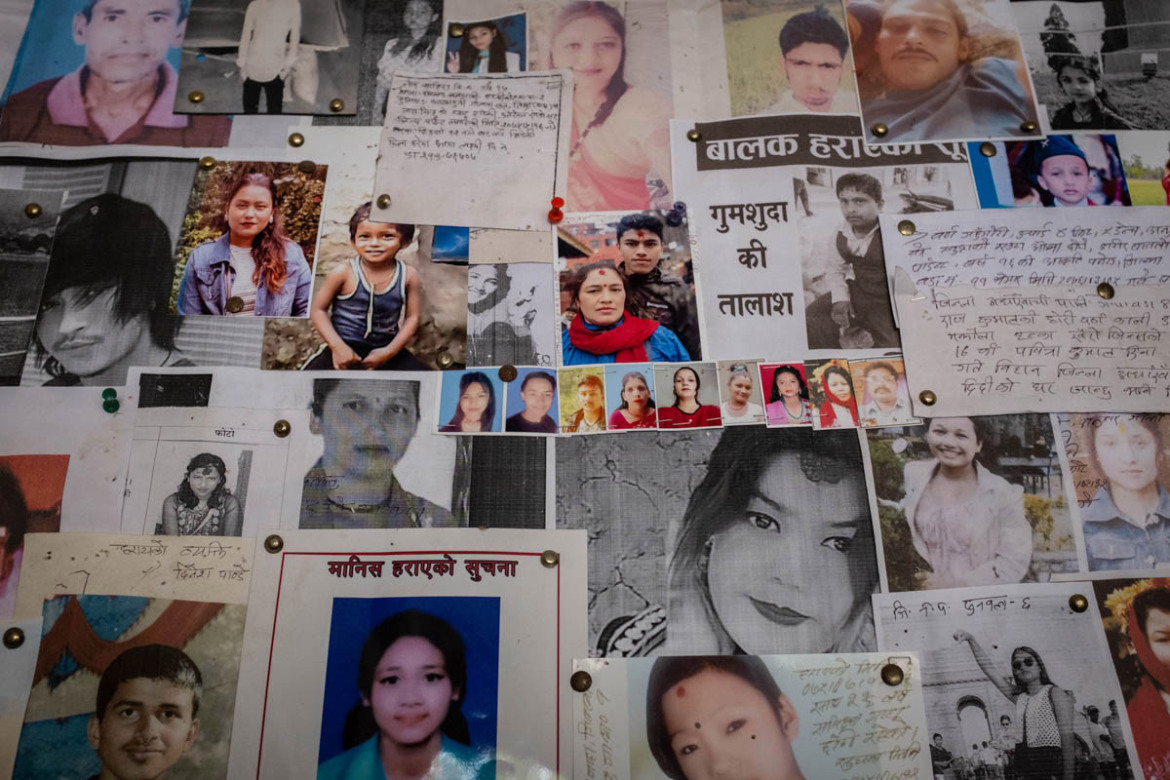 Photos, messages and descriptions of missing men, women and children – many thought to have been trafficked – fill a board at the Nepal-India border police station in Bhairahawa. A 2019 ​report​ by Nepal’s National Human Rights Commission confirms that many missing children and adults end up trafficked. [Violeta Santos Moura/Al Jazeera] 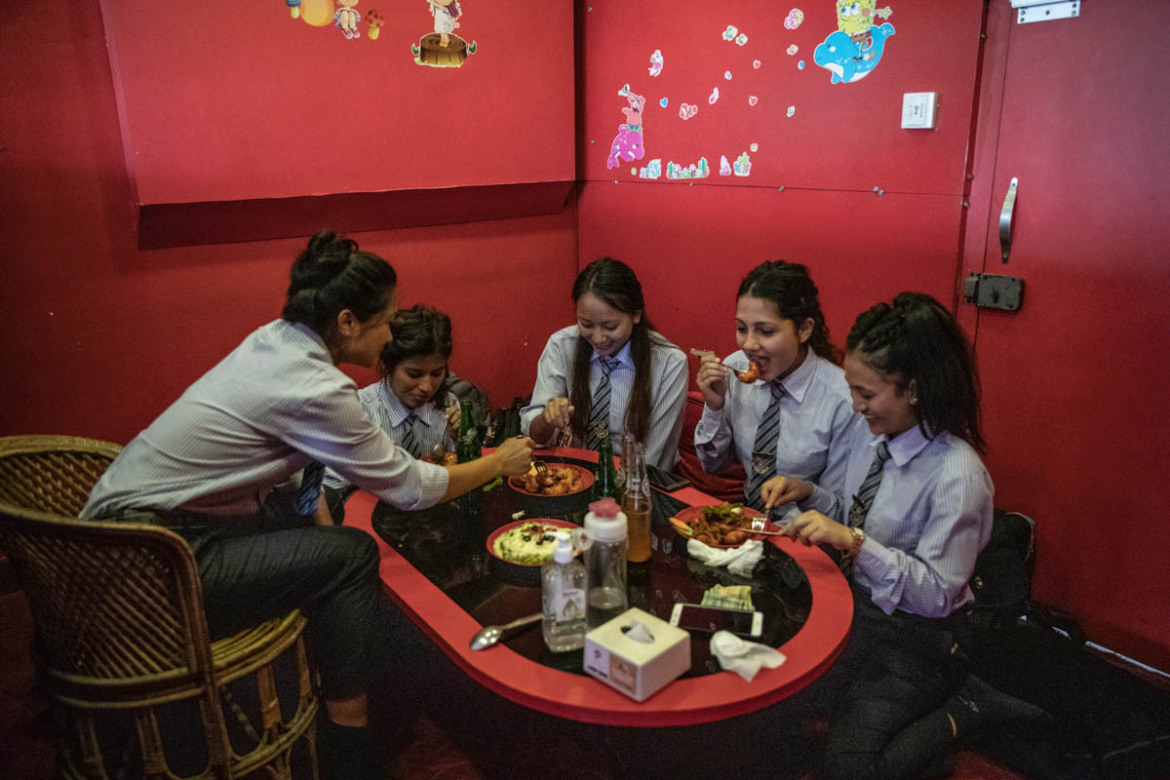 Despite having lower levels of female literacy – 53.1 percent – than its neighbours India and China – 60.6 percent and 94.5 percent respectively – Nepal has shown significant progress in increasing literacy for all over the years. General literacy rose from 20.6 percent in 1981 to 67.9 percent in 2018, growing at an average annual rate of 36.06 percent. [Violeta Santos Moura/Al Jazeera] 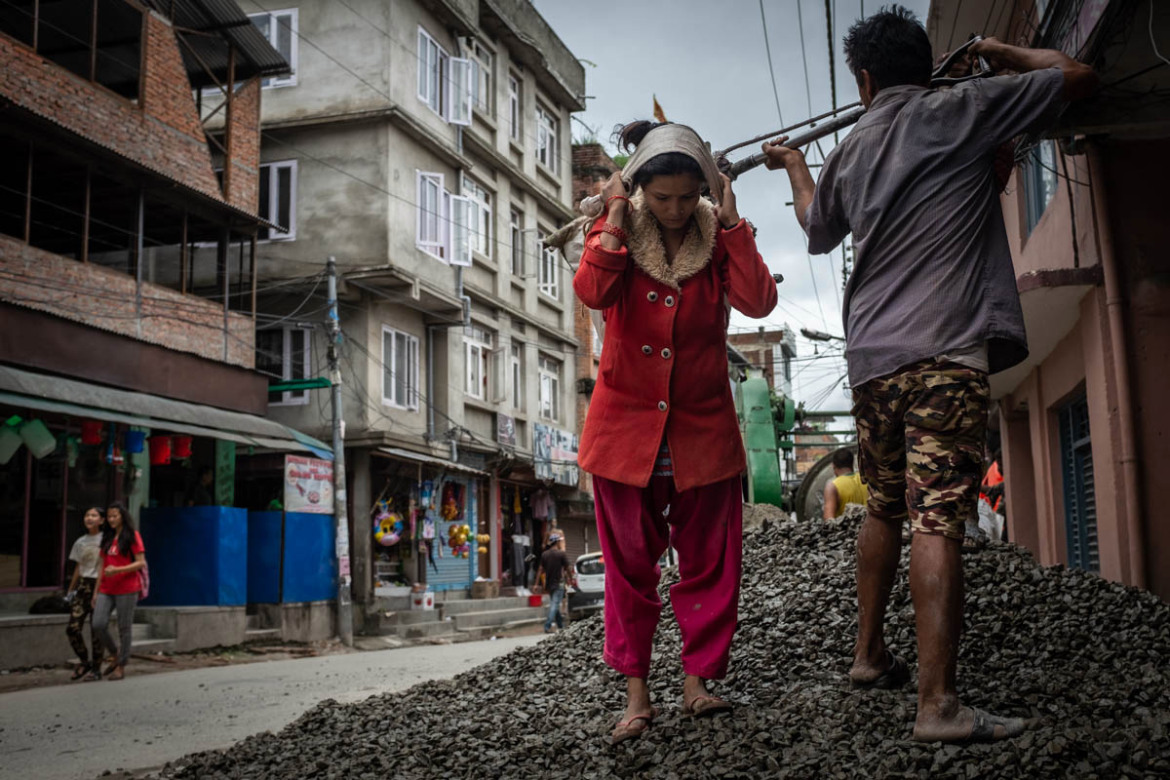 It is common in Nepal to see women, girls and children working in construction sites, brick manufacturing and in other heavy and dangerous occupations. [Violeta Santos Moura/Al Jazeera] 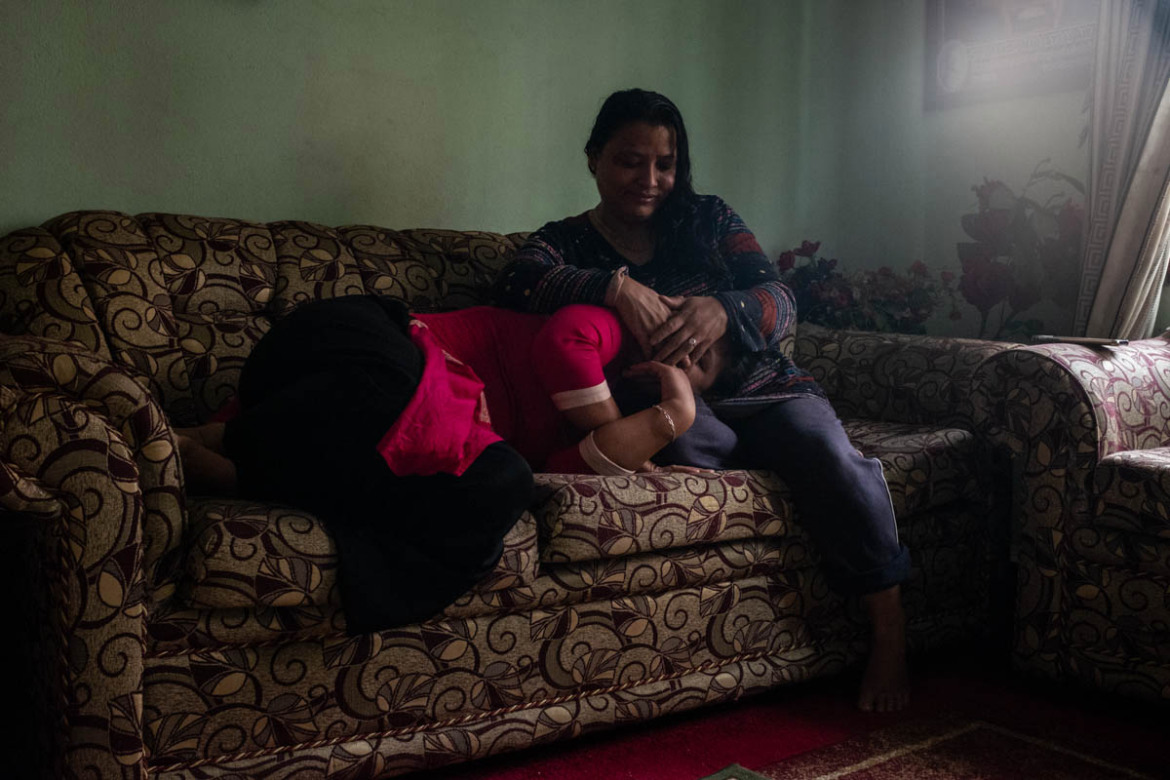 Sunita Danwuar, right, covers the face of 30-year-old Tina*, at the Danwuars’ home in Kathmandu. Tina survived rape, abuse and enslavement in Kuwait, and Sunita was rescued after being kidnapped from her family at 14 and raped for four years in a brothel in Mumbai. She now spearheads the fight against the trafficking of women from Nepal. The two women are a source of support to each other and other survivors. [Violeta Santos Moura/Al Jazeera] 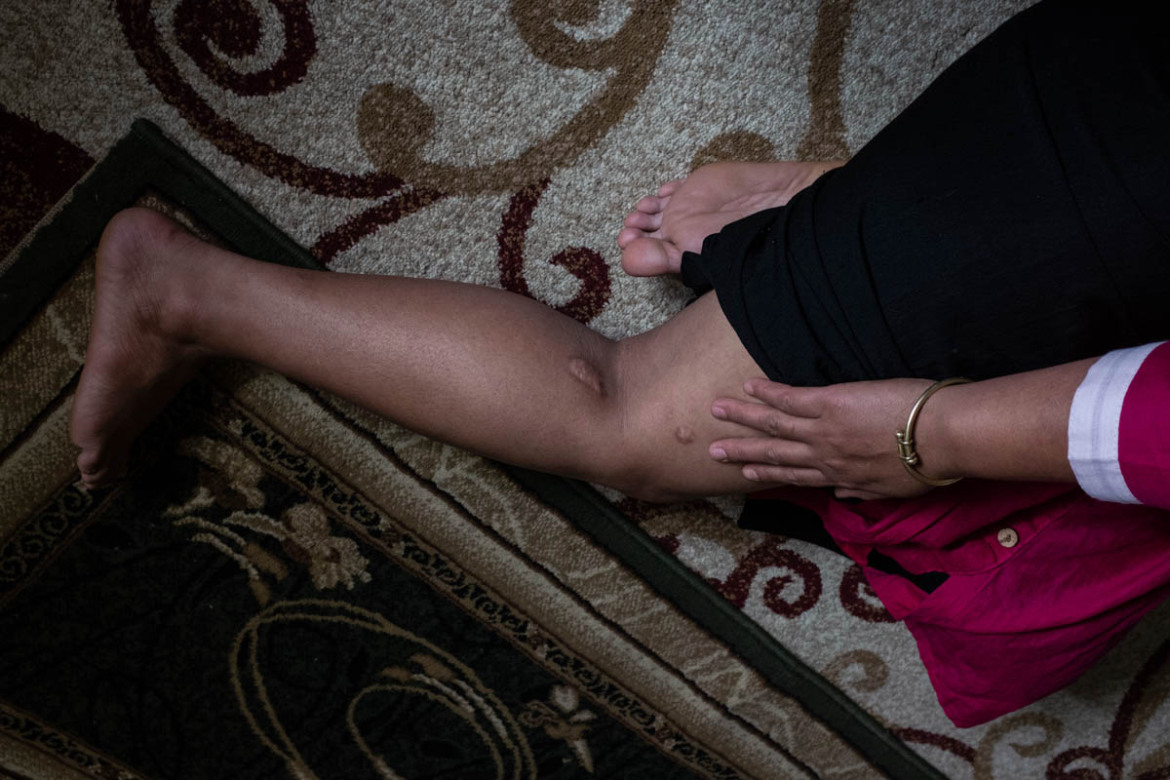 Tina*, a sex trafficking survivor who asked that her identity not be disclosed, shows scars from injuries she suffered during the systematic rape, abuse and enslavement she suffered in Kuwait, where she thought she was going to work as a domestic maid for a family. Instead, she said the family kept her captive to be raped by its men and their guests at parties. [Violeta Santos Moura/Al Jazeera] 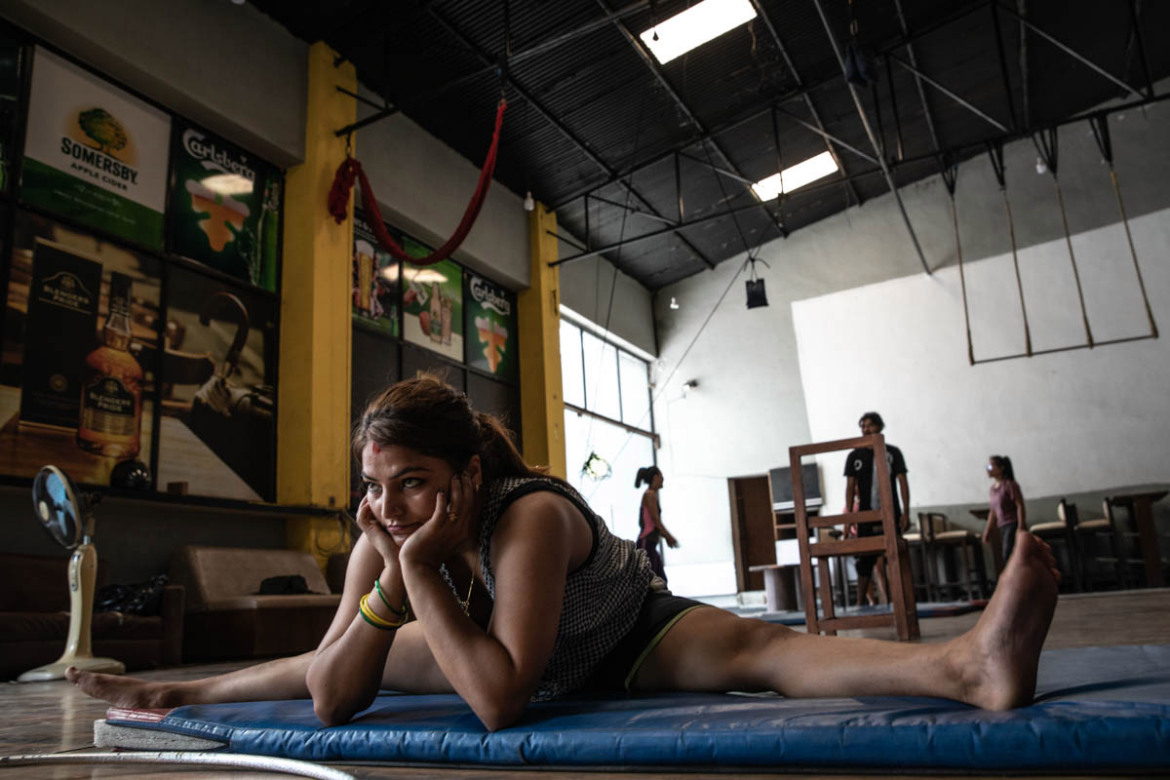 Saraswati Adhikari, 29, who was sold at age nine by a neighbour to a travelling circus in India, stretches during circus practice in Kathmandu. After being rescued six years ago and faced with lack of opportunities, she became a contemporary circus performer in a company she formed with other former circus slaves. During her time as a child circus slave in India, Saraswati was never allowed to go to school, was routinely beaten, poorly fed, never paid and was married off at 14. At 17, she already had already given birth to three children. [Violeta Santos Moura/Al Jazeera] 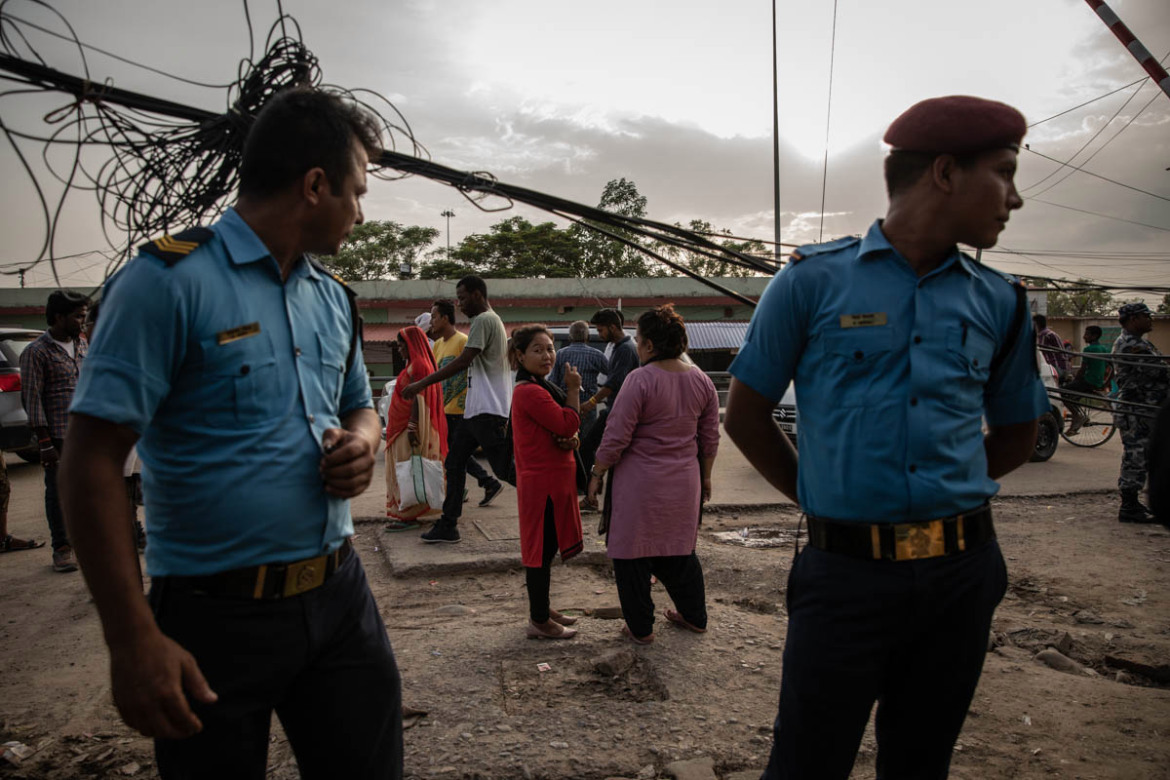 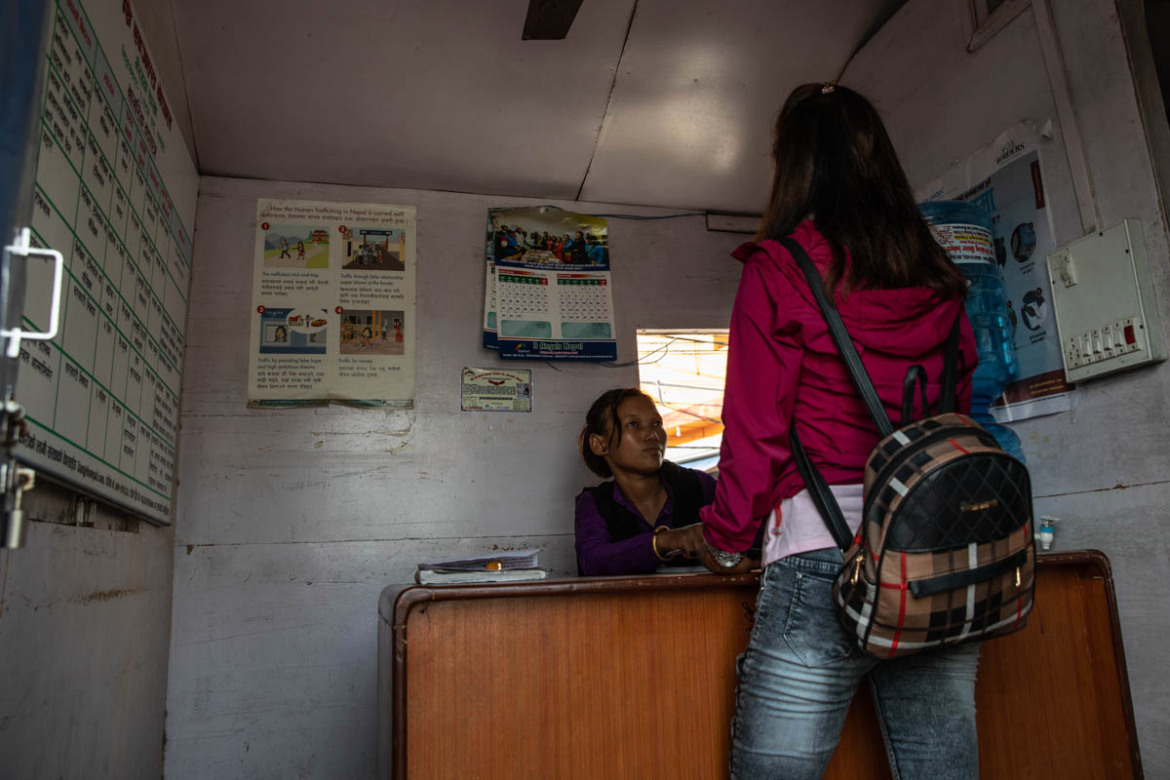 Danu Thapa, 24, an anti-trafficking NGO border monitor, questions a girl in an NGO booth after stopping her at the border pass in Bhairahawa. Poverty is the most common reason girls agree to be trafficked. But lack of human rights protections, political instability, conflict, natural disasters, illiteracy and corruption catalyse the phenomenon. [Violeta Santos Moura/Al Jazeera] 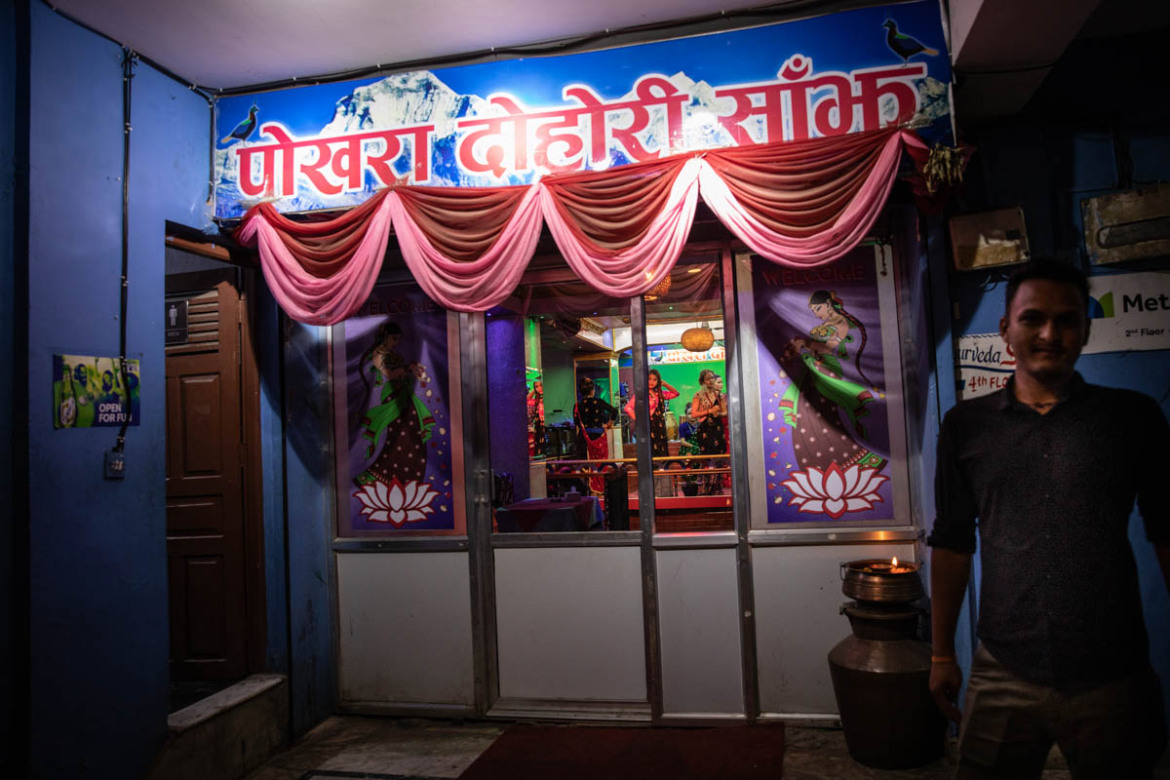 A patron (right) is seen at the entrance of a type of singing bar and restaurant known as ‘dohori’ where Nepali music and dance, both traditional and modern, is performed, in Kathmandu, Nepal. [Violeta Santos Moura/Al Jazeera] 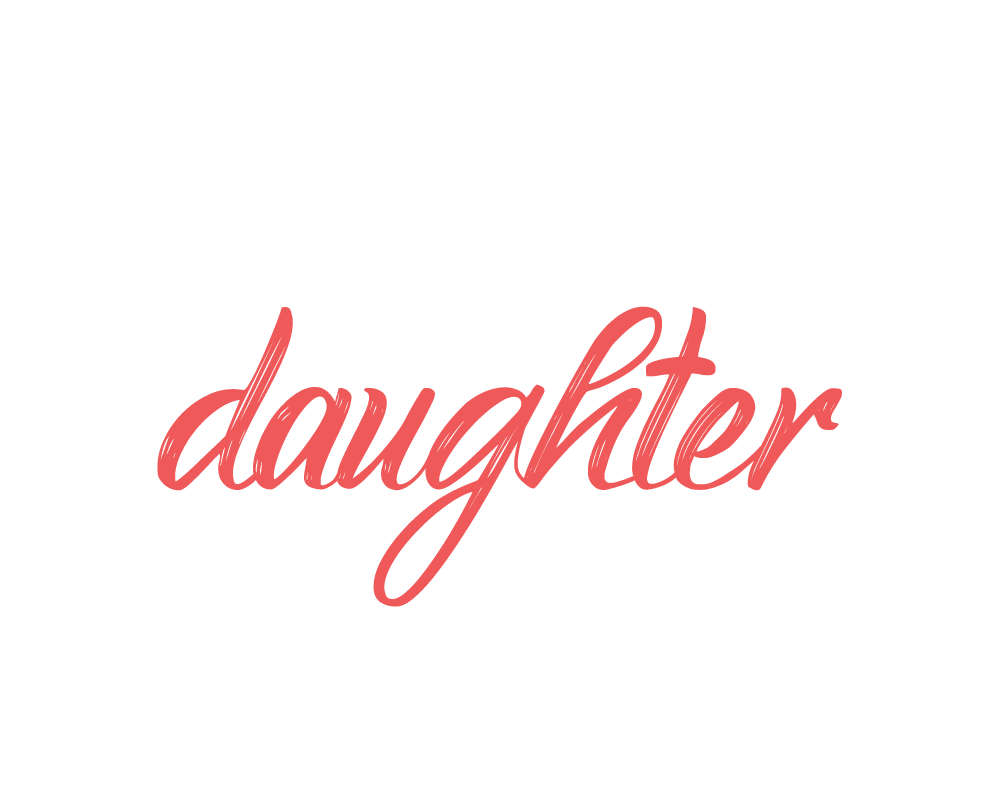 © Every Daughter Matters. All Rights Reserved.
Designed by MOVED & AiT